I’m getting ready for Twitter Math Camp's calculus working group (ah!).  We’ve been asked to bring some activities to share with the group, so I’ve been frantically searching my blog this afternoon for stuff I can contribute.  I was typing up a list when I realized I don’t have a whole lot for the second semester of Calc AB.  I imagine a lot of that has to do with the fact that we’re in review mode for half the semester, but still.

However, I did realize that there was one pretty good lesson on slope fields that I didn’t blog about.  I probably didn’t write about it because I stole it 100% from my APSI instructor last summer.  Nevertheless, I’m not feeling that trepidation currently.  This magic should be shared. 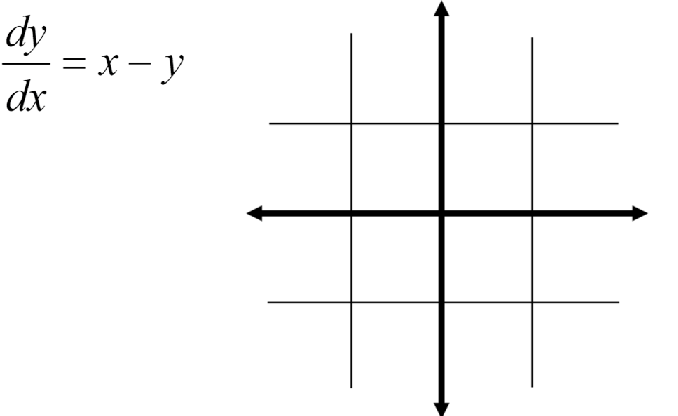 For this example, we discussed questions like:
And I mean that was pretty much all they needed in the way of instruction.  Not that it's all that complicated to begin with, but this was a nice, everyone-get-up-and-contribute type of lesson.

Again, I can take zero credit for this.  But I thought it was worth sharing.
Posted by Rebecka Peterson at 4:44 PM 3 comments:

I taught a five-day summer camp last week to prepare our incoming juniors and sophomores for the PSAT/NMSQT.  One of the greatest things about it, for me, was that the other teacher (English) and I have very similar approaches to teaching; that is, make the kids do the work and talk as little as possible.  We split the kids into groups quite a bit (half did math with me and half did English with her and then we'd switch); when we reconvened, we'd often shrug and say, "Well, that was easy."  We got to teach some pretty motivated kids (especially considering it was summer), and they were good at taking ownership for their own instruction.

That said, there were still times when I'd have an internal panic attack that went something like, "WHAT AM I GOING TO DO WITH THESE KIDS FOR THE NEXT HOUR AND TWENTY-FIVE MINUTES?"  Because it wasn't really "normal" school where I have to get through Section 4.1 today, please and thank you.

So, this little idea came from trying to stretch out what was supposed to be a 15-minute activity into a 30-minute activity.  Honesty is the best policy?

Last summer I attended a PD session on literacy.  Apparently, some stuff really stuck, such as this idea which (I think) the instructor called "Class Consensus." I've done this with some reading passages with moderate success.  But how I never thought to use it with math exercises is beyond me.

This is how it went down:  I gave each student a "Mini-PSAT Test," consisting of seven past PSAT questions.  They were given ten minutes to work this test on their own.  After the ten minutes, they compared their answers with their partner and were asked to reach unanimous consent.  Then, the group of two joined another group of two, and the new group of four was asked to also reach unanimity.  Then the groups of four made groups of eight.  At this point, I had written on the board the numbers 1-7:

I asked the students to write down the answer to each question.  However, they'd better make sure the class agrees because, if a question was wrong, I wouldn't tell them which one was wrong.  I would only announce if they were all correct or not all correct.  I was a little worried about this getting hijacked by one or two students, but it really didn't.  Sometimes one person would go up and write the answers to all the questions (s/he had discussed it with the class first), and sometimes kids would go up one by one and write down an answer that they felt they were confident with once they had discussed it with their peers.  I did this with two different tests and with two different groups, and all four times the class got all the questions all correct without asking me anything (well, I refused to answer questions...).  A couple times, someone would say, "I still don't get Number 2," at which point I could say, "Who put up Number 2? Will you explain, please?"

It was kind of magical.  It's not that different from what I do a lot in class ("Do a problem on your own, then check with your partner"), but just tweaking this a bit generated a lot more conversation and forced kids to talk math with people other than just their partner.  Also, since you're getting so many opinions, it's unlikely the answers will be wrong once you've checked with your entire class.

I'm finding that little activities--for lack of a better word--like this are so valuable to have in my teaching arsenal.  While they might not be anything glamorous, they can really get the job done and spark conversation considerably more deep than what I would get through the traditional mode of teaching.