I have an odd love for the unit circle.  I bet most math teachers do.  I had a professor in graduate school who said, "There's nothing left to be discovered in the area of trigonometry.  Just draw the damn unit circle and you're done."  I think that's why I love it so much.  There's so much information you can gather from such a simple representation.

This year in PreCalc, my team and I actually started the year with trigonometry.  So, the kids were introduced to the unit circle on the second or third day of school, I believe (I know...this post is like five months late).  Since we use the unit circle so much, I really wanted to give the kids a visual understanding of where all the ordered pairs come from.  So, in addition to giving them blank unit circles to fill out, I also gave them three triangles that fit onto their circles:


Here are the unit circles (I stole this off the Internet sometime ago...let me know if they're yours!).

And here are the three triangles that I created; each hypotenuse should be the same length as the radius of the circles in the previous document:

Using what they remembered from geometry and given that each hypotenuse has a length of 1, the students labeled the remaining sides of the triangles (on both sides of the paper).  Then, they placed the triangle that fit on each coordinate and the x- and y- coordinates were (hopefully) clear to see.

I had the students tape both their completed circle and their three triangles to the very front of their composition notebooks.

Another activity that we did, which I adapted from an article in Mathematics Teacher, was I created a huge "human unit circle."  I bought a cheap plastic tablecloth and drew a circle on it, but there are lots of ways to make one.  Then, I made cards for each coordinate on the circle.  I printed this twice on two separate colors: one for x-values and one for y-values:

I had half the kids pick up a green card (x-value) and half the kids pick up a yellow card (y-value).  Then, I asked them to find a student who had the other part of their ordered pair (we discussed how for most of the cards there were two options).  Once they found their partner, I asked them to place their ordered pair on the correct location on the unit circle:

Once they finished placing their cards, I picked up random ordered pairs and had them give me the corresponding angle, in both degree and radian measure.

I thought the kids did really well with the unit circle this year.  Now the trick is to keep practicing it with them even though we're done with our trig units... :)

Email ThisBlogThis!Share to TwitterShare to FacebookShare to Pinterest
Labels: pre-calculus

Three thoughts on the Chain Rule

I love this comic by Courtney Gibbons on "How I learned the Chain Rule."  I showed it to my classes this year:

I never really liked using the terms "inside" and "outside" functions anyway.  Maybe because you can decompose functions in an infinite number of ways, and those terms, to me, imply that there is only one inside and one outside function possible.  I don't know.  Maybe I'm being too picky.  But, I kind of liked the mother/baby analogy.  And my kids LOVED it.  It's hilarious when someone walks in and my kids are muttering, "Ok, now differentiate the baby..."

But, in all honesty, here's what I really like about this comic...you can extend the idea, which is something you cannot do with the terms "inside" and "outside" functions.  Here's what I mean, let's say you have a function such as y=f(g(h(x))).  Now you have baby (h(x)), mom, (g(x)), and--you guessed it--grandma (f(x)).  The kids went wild the first time they heard this.  But, seriously, it works.

I'm pretty sure I haven't posted this before, but here's a worksheet for practicing the chain rule.  My textbook doesn't have a lot of these types of problems (actually, I don't think it has any), but AP Calc students (well, I think all calc students...) need to learn to recognize that the chain rule is required to differentiate functions in the form of y=f(g(x)), even when f and and g are not explicitly defined.

It looks like there's four pages  here, but it's really just two (I print two pages to a sheet so that they'll fit in students' composition notebooks).  The second page  gives practice with functions defined by a table.


*****
One more note on chain rule.  When we have a trig function raised to a power, such as y=sin^2(x), I encourage (read make) my students rewrite the function as y=[sin(x)]^2.  This makes it much easier for them to identify the mom (x^2) and the baby (sin(x)).  I try to start this habit in PreCalc so that it's second nature by the time they see it again in Calculus.

And that's that.  Chain rule...I'm getting a little better at it.  Slowly but surely.

I'm always trying to fine-tune review activities.  I used to be really into review games.  I would spend hours creating games that we'd play the day before a test.  They're fine:  I still use several of them.  But my criteria of what constitutes a good review has really simplified to two things:

These two objectives led me to a very simple review for my PreCalculus classes that I thought went swimmingly.

The kids were given a study guide to review for their Quarter Exam (kind of like the Quarter Quell...just kidding...sort of...).  The next day, they were to come to class with a note card with a question like one from their study guide but with different numbers and multiple choice. I didn't tell them which problem to work; I asked them to pick one that they felt they needed more practice on.  (Because if one student needs more work on an objective, then there will be other students who need help in that area also.) Additionally, they were asked to fill out this Google Form so that I could have a key to their questions without having to work fifty problems: 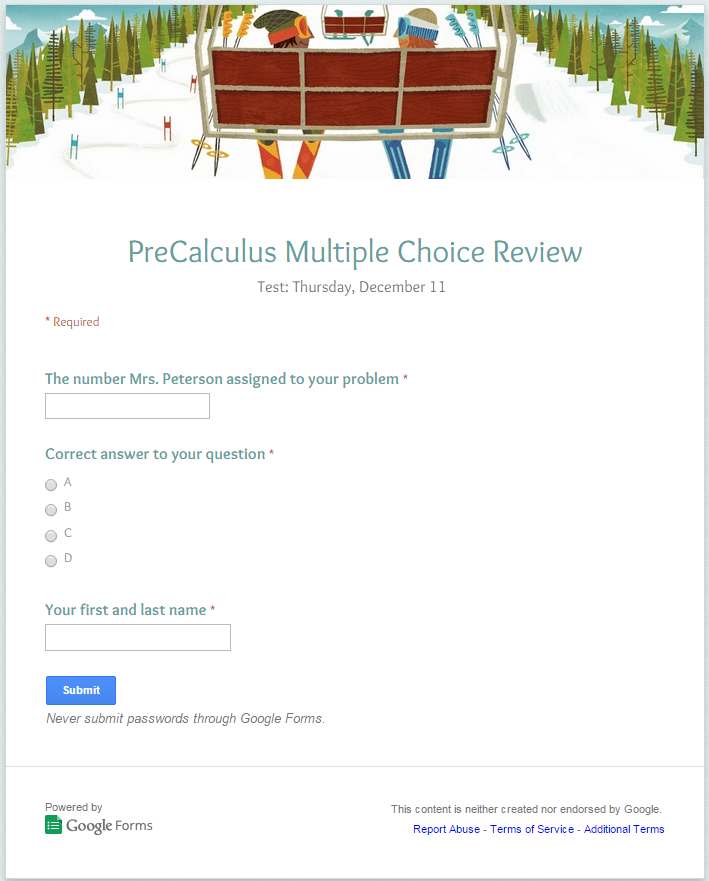 I took two days to let the kids work through all the problems (the first day they worked through their class's cards and the second day they worked through the other PreCalc class's cards).  I made slips of paper with the numbers 1-49 (each kid was assigned a number) so that they could keep a record of their answers (and I could grade them easily).  I made them go back and correct the ones they missed.

This was absolutely lovely because I really didn't have to do anything these two days.  Normally I walk around and take questions, but I wanted the kids to be answering their own questions.  If someone would try to ask me a question, I would tell them to ask the person who wrote the question.

This is the rubric I used:

Q2 MC Test Question Assignment (10 points)
2 points: Create a question like one from the study guide with at least medium difficulty

1 point: Index card formatted correctly:  assigned number on the top left, question with all four answers, name and hour on back

Things I really liked about this:
The only thing I didn't like so much:
I really liked how this played out.  Super easy on the teacher's part, and kids got loads of practice.