I think this idea originally came from Virginia Tech, but I may be wrong.  In any case, here's how we did exponential regressions in College Algebra this semester.

Each student gets a "Fun Size" bag of M&Ms.  Students divide into teams of 3-4.  Each team gets a napkin that they're asked to unfold completely.  The teams spill out their M&Ms on their napkins, making sure all candy pieces are lying flat on the napkin.  Now for the math...
After each turn, I asked all teams to tell me how many M&Ms were left, and I inputted their results into an Excel spreadsheet, which was being projected on the board.  I created a template so that with each number I inputted, a scatterplot began to form.  [Download the template.]  After five turns, one group's data (whose M&Ms cooperated quite nicely) looked like this: 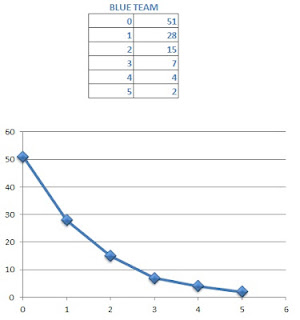 After the M&Ms were gone, I asked each team to find an exponential regression using their graphing calculators that fit their particular data (they could look up at the Excel spreadsheet, where the data had been recorded for them).  In a perfect world, their regressions would look something like y=a(0.5)^x, where a is the number of M&Ms they started with.  Of course, the number of M&Ms doesn't diminish perfectly to half its previous size every time, so we got results that looked more like this (again, this was a rather good trial): 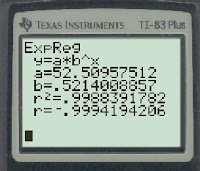 But the imperfection is good.  For one, that's life.  For two, it makes it a little less obvious as to what's going on and creates a nice starting point for some discussion.

After the students gave me the regression equations, I plotted the regressions on Excel (which you can do easily in just a couple clicks).  I asked which team looked like they had the best regression and then we compared r^2 values to see if they matched the students' intuition.

I really wanted to use Skittles for this project so I could call it "Skittles:  Taste the Exponential Regression."  Alas, M&Ms were half the price of Skittles and my frugality won over.  Maybe next semester.
Posted by Rebecka Peterson at 2:51 PM 2 comments:

Last semester when I taught log equations, a curious student asked, "Why is it that we sometimes get extraneous solutions?"  A fantastic question that, at the time, I answered horribly.  I gave some mumbo-jumbo explanation about how extraneous solutions can appear when we combine logs. For example, for log(ab) to be defined, we need only ab>0, but that can be the case when a and b are either both positive or both negative.  If they're both negative, then they wouldn't satisfy the original expansion log(a) + log (b).

Not my finest moment as a math teacher.

This semester, I was determined to come up with a better explanation.  I gave my classes the following true/false question.  (I'm mean and didn't give them the option of "sometimes true.")


The students said it's true (with no hesitation) and justified it with the Product Rule (Power Rule works, too).

Then I showed them this:

"So, what's going on here?"  I asked innocently.

We had a good discussion about how the left graph is the same as the right if you restrict them to x>0 and how the right side would be defined for both positive and negative values for x since any real number squared is non-negative.  This (I hope) led to the powerful conclusion that the properties for logs have to be used with caution since logs are only defined for positive arguments.  This was stated when we first introduced the rules, but it's easy to forget.  Furthermore, when solving log equations, we don't know if the arguments are positive or not...so we have to use the properties and then come back and correct ourselves if need be.
Posted by Rebecka Peterson at 2:54 PM 5 comments:

I recently wrote about the awesome survey idea I stole from a good friend.  Several responses are now in, and I am a little surprised by the one and only common theme:  they love the YouTube videos.

I'm not surprised by this theme.  I'm just surprised it's the only one.  Well, I think review games were a theme, too.

I really like the class so far. I love how Professor Peterson explains everything in depth, plays review games before every test, and of course, shows us YouTube videos every now and then!

I enjoy the video clips you use in your teaching.

On another note, one student did make this comment that I really love:

In most of the math classes I have been in, I'm often lectured at and I'm just taking notes. It took me a little bit of time to get used to being asked questions in the middle of notes, but I like it now.

I love this because, honestly, sometimes--no matter how hard I try--I feel like I really am just lecturing at my students.  But, one thing I do consistently is ask for students' thoughts--not as a whole, but individually.  On any given day, each student will be called upon anywhere from two to four times during the class period.  It took me a while to muster up the courage to be so direct with my class; I know lots of teachers do this naturally, but it was something I really had to practice.  However, the results have been great.  For one, I get a pretty good gauge on how well they're picking up the material without any kind of formal assessment.  For two, they stay a little more alert since they know they might be called on any second (emphasis on little).  For three, apparently they don't feel lectured at!  Hoorah!

Thoughts?  Do you call on students often as well?  If so, is it as successful as I'm making it sound?  Any downfalls?