Somehow summer classes have come and gone.  I know students take summer classes to learn information fast.  I hope that they really do learn.  I do know that I've learned so much more than I thought was possible, so I wanted to take some time to write what I thought went well this semester and what didn't go so well.  This way, if I get to teach calculus again, I can come back and remember what needs to be stressed more.

What I plan to keep:

What I need to change:

What I plan to focus on more with my algebra and pre-calc students to get them ready for calculus:

This may be old news to some, but I just found this on YouTube.  It hurts my heart a little.

Ok.  More than a little.

I gave my calculus students the following question on their final: "Name the two inventors of calculus.  Which do you like better and why?"

I really didn't know what answers to expect, but I found myself thoroughly enjoying their responses, and thought you might, too...


Newton.  Honestly, I feel that his work was more useful.  Plus, he did much more that I know of other than calculus.


If I had to choose, I like Newton because of his wide range of scientific contributions.  Also, to be honest, his name is easier to pronounce!


I like Newton better because he came up with the laws of motion and his name is easier to pronounce.

I like Newton better because he also came up with his physics laws.

I like Newton better because he has a lot more to do with science in my opinion and I like science a lot.


Leibniz all the way.  Integral signs are fun to draw, and he's overshadowed by Newton too often.

Leibniz notation, while more "foreign" is much more straightforward.  Newton, though is considered to be one of the greatest minds in all of history (according to Neil deGrasse Tyson).  I appreciate both their mathematic contributions equally.

I like Leibniz better because he has a cooler name.


I like Newton better because I can spell and pronounce his name. :)


I like Leibniz better because technically he invented calculus earlier than Newton.

Leibniz. His notation was easier for me to understand.

Leibniz--his method of calculation is easier for me to understand (Leibniz notation).

Question for the blogosphere--whom do you like better, and why?
Posted by Rebecka Peterson at 11:24 AM 1 comment:

More thoughts on the Chain Rule

I posted about how teaching the Chain Rule was a lot harder than I thought it would be.  I'm still convinced this is at least partially due my students' lack of understanding/recognizing a composite function.  For example, just the other day we needed to simplify the expression

And a student (one of my top students, I might add) suggested we "divide out an ln."

Let's ignore the fact that dividing by any number other than 1 would change the expression.

Dividing by ln?  So...somehow there's not a connection that ln is meaningless without an argument.  "Dividing by ln" is akin to "dividing by √ " or "dividing by cos."  An empty square root or an empty cosine doesn't have any kind of value, and really doesn't mean a thing.

and was told that in order to find the derivative, we should use the Product Rule.

Do students view ln as some sort of constant?  Like e?  It seems maybe so if the function above is thought of as a product and if we can indeed "divide out ln."

I decided we needed to revisit the Chain Rule.

I started by showing a slide that had a composite function at the top and four expressions beneath it such as: 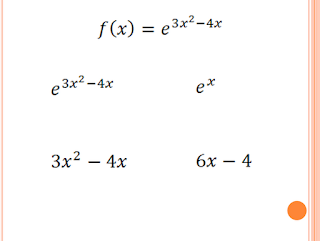 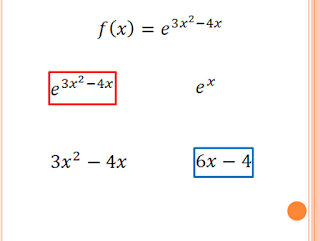 We did several of these.  Then we concluded with other types of functions to test if they knew when to use what rules.

I think I will start with this type of presentation the next time I teach the Chain Rule.  Giving the students a limited amount of options to start out with seemed to worked fairly nicely.

There are still definitely some issues.  But I now have a better understanding of what needs to be emphasized  in terms of composite functions.  I will try to make them more densely populated in my algebra and pre-calculus classes from now on.

If you're interested, here's the slideshow we worked through:

M&Ms and the Population of Afghanistan

In Business Calc, we're currently studying exponential growth and decay.  I'm rather excited about this since it's something we study in College Algebra, too, and I feel--because it's material I've taught before--that I can expand a bit.  I'm learning that it's really, really hard to expand (i.e., go beyond an absolutely dazzling lecture *cough*) when I'm teaching a class for the first time.  I sort of feel like I did my first semester as a TA:  I just hope I don't screw something up too terribly. But--you gotta start somewhere, right?!

Anyway.  Back to exponential growth/decay.  In College Algebra, when we study exponential functions, I have my students model the decay of an M&M population.  I had planned to do this with my Business Calc class as well.  Then Bowman Dickson posted places to find awesome data, which made me want to use data the UN has on the world's populations instead.

The question:  How to relate M&M's to population growth or decay?

The answer:  I'm not entirely sure.  Here's what we did though...

We started out with the M&M project as in College Algebra.  Each team found the exponential regression (in the form y=ab^x) and the r^2 value for their data.  We talked about the meaning of a and b.  Then I asked them to convert their regressions to the form P(t)=P_0e^(kt), which turned out to be very close to the trendlines Excel found (yay!).  We talked about what k would mean if it this were a real population and how it's related to the derivative.

Now the challenge:  I asked them to do the same types of calculations for an actual population, using data from the UN.  They were on their own for this project, which may or may not have been a great idea.  Below is what they had to go off of.  I focused mainly on finding the exponential regression on a TI as well as understanding growth/decay rates.  But there's much, much more to do here (Bowman does a week-long project!).

And here's the project!

Population Growth or Decay Instructions
Posted by Rebecka Peterson at 6:36 AM 3 comments:

The past three years I've taught math at the introductory college level.  And I've loved it.  The last year of this three-year gig has been spent teaching concurrent high school juniors and seniors College Algebra.  I had the privilege of teaching some amazing high school students classes sponsored by the local community college.  I loved everything about my job.  So much so, that I distinctly remember telling my husband a couple months ago that if the high school I taught at offered me a job, I would seriously consider switching from college to high school teaching.

I know there are a few things I'm giving up by taking a break from the college scene (there's a reason I went straight for a Master's in math), but there's so much I'm looking forward to.

What I can't wait for
What I'll miss

All in all, I feel I'm gaining much more than I'm losing.  I'm really thrilled to be teaching at the high school level; although, I'm definitely scared out of my mind.  I've said from Day One that I'm extremely passionate about seeing high schools and colleges have conversations about how to make education a more continuous process from grades 12 to 13.  I'm hoping that gaining high school teaching experience will allow me to someday be a voice for programs that enable high school students to start their college or technical careers early.

So, starting in August, I'll be teaching Algebra 2 and Pre-Calc!  I'll be staying on as an adjunct at the community college, but, rest assured, I'm taking this fall semester off!
Posted by Rebecka Peterson at 5:04 PM 7 comments:

Email ThisBlogThis!Share to TwitterShare to FacebookShare to Pinterest
Labels: musings

My summer calculus classes are coming to a close (two weeks left--gah!).  For both finals (Business Calc and Calc I), I'm planning on having a computational part and a conceptual/theoretical/write-it-out-in-words part.   I'm working on questions for the latter part, and I need your help.  What other major (mostly differential) calculus concepts would you add?  Are any of the questions unclear?  All help is greatly appreciated!

PS:  These questions are not written in any specific order.