First of all, American idioms were the hardest part of high school grammar for me.  While English is now my best language, it is not my first.  I would never say growing up in a family where neither parent's native language was English ever inhibited my performance in school...except when it came to that darn chapter on idioms in English class.

I clearly remember having assignments where we had to identity the idiom in the given sentence and replace it by a less trite, but similar-in-meaning phrase.

I could always identify the idiom (because it was the only part of the sentence I had never heard in my life).  But I could never replace it with the correct meaning.

Clearly, my Googling skills were not up to par in 2003.

To this day, I hardly ever get idioms right.  I try.  But I usually fail.  I'll say things like, "Don't put all your chickens in one basket," "You hit the nail with the head," or, "Don't count your eggs before they hatch."

So, when I was typing the title for this post, I had double check to make sure I was using "I have a bone to pick" correctly.

I believe I did use it correctly.  And for your further educational value, according to wikianswers:


"Bone to pick," dates back to the 16th century, simply refers to a dog chewing endlessly on, and "picking clean," a large bone. A "bone to pick" is thus a subject or issue that is expected to require considerable discussion or argument.

You probably already knew that since--somehow--natural-born American citizens seem to come out of the womb with an understanding for these types of phrases.  I was not born with this.  Thankfully, there's Google.

So, yes.  I have an issue with the Product and Quotient Rules.  This is an issue I remember having even as a student.  Here's what I don't get.  In the texts I've used, the Product Rule is typically presented as:

While the Quotient Rule is given as:

I cannot be the only one who has a problem with this.  Why are we making the two rules as different as possible, and hence (in my opinion) as hard as possible, for students to memorize?

As a student, I tried to come up with a way where I could memorize both rules with as little effort as possible, because I was convinced my brain could only hold a finite amount of information.  And I had already stuffed it with a lot of nonsense about idioms.  So, for both rules, I committed to memory:

Then, for the Product Rule, I would insert a plus sign in the space; for the Quotient Rule, a minus, and put it all over the square of the second. I loved this because I could just move from left to right or up to down in either case.  For both rules, u is the first; v is the second.

And so this is how I've been teaching the two rules.  As an added bonus, I feel like I'm sending the subliminal message: Differentiating a function can mess it up, or make it "worse."  As in, the derivative of a [continuous] function is not necessarily continuous.

Ok, it's very subliminal, but maybe some will catch on.

I know, I know, the standard proofs typically do not yield the rules in this fashion.  But what is keeping textbook authors from adding one more little line to the proofs, saying, "And with a little rearranging, we get..."

I know I can't be the only one who teaches it in this way.  But I do know I was only ever taught the "textbook" way.  And I never understood why my teachers wanted to make it so hard on us.

I'm trying to convert my own students to my method now.  Unfortunately, their books present the rules the "standard" way, and so that sometimes gets me in trouble.
Posted by Rebecka Peterson at 10:47 AM 3 comments:

The Chain Rule was harder than I thought

This is my first go at teaching either class, so I'm sticking pretty close to what the books say.  I figure the authors are the experts on both the subject and the audience, so it's a good starting point.  Both books teach the Chain Rule quite differently, so I was excited to try both and compare and contrast.

Unfortunately, one thing I found across the board was that many of my students don't have a firm grasp on composition functions. Sure, they can compute fog, but ask them to go the other way--to decompose a function--and all of a sudden at least half of them look at you like you've asked them to please go swim across the Atlantic Ocean.  It was a frustrating moment as a teacher because I couldn't find a way to explain decompositions without using the typical vague words like "inside" and "outside" functions. I tried saying that the "inside" function is what has parenthesis around it, or the expression you could put parenthesis around without changing anything.  Yeah...that works for functions like


But when we got to

they told me the inside function was e.

Not e to some power. Just e.

On me, not my students.

Note to self: learn how to teach the decomposition of functions.

The Chain Rule via Leibniz notation did go a bit better. We talked about how if a company that produces video games wants to know how much it is making per minute, it could take how much it makes per game sold and multiply that by how many games it sells per minute:

For the "guess" for f'(x) we applied the Power Rule to the "inside" function and got
Then we found the actual derivative for f(x) by expanding it and using the Sum Rule.  We found that the derivative was the same as our guess but multiplied by 3x^2!

I just got a bunch of, "So, what was the guess for?"  "What's the final answer?"  "How would you enter that into MyMathLab?"

I think the "guess" thing really could have been powerful.  I just need to ponder how to present it better.

So, that's the Chain Rule.  Some things worked.  Some didn't.  Most didn't.  But this is one of the amazing parts of teaching mathematics--learning how others learn math.

Two weeks down of summer classes, six to go.

These past two weeks have reminded me how hard it is to teach a class for the first time.  I continually feel like I'm coming up short because I compare my performance in my summer classes to my performance in a typical 16-week class that I've taught many times.  I know that's not a fair judgment, but I still do it.  I also know you can't learn how to teach a course well if you don't ever teach it that first time.  Still, I feel all my energy is spent just trying to get half-way decent lectures ready, to keep up with homework questions, and to write tests.  I don't have much time or energy to provide learning experiences outside of the typical lecture.  And I hate that.

That said, I'm learning more about the teaching and learning of calculus every day.  And I think that's pretty priceless.  Also, I think I've been given a set of unusually patient and gracious students this summer.  I get thanked about every other day for doing what I do.  And for someone who needs pats on the back, that is the biggest reward I could get.

That's my vent.  Now for some calculus...

Every semester I have my students write an introduction about themselves.  In addition to hobbies and life goals, I ask them to tell me why they're in the class, their math background, and their current feelings towards mathematics.  In doing so this semester, I learned that many of my students have had calculus before.  So, before we ever talked about the Power Rule, I would ask something like, "How can we find the derivative y=3x-2?"  I would, of course, get an eager, "Well, I learned how to find derivatives another way, and you just take the exponent and multiply it by 3 and then reduce the exponent by one...so the derivative is 3."  Everyone loves the Power Rule.

"You're absolutely right, and we'll talk about the Power Rule soon.  But can you think of the geometric definition of a derivative and tell me what 3 corresponds to in the linear function?"

All this to say, I wanted to introduce the Power Rule differently, somehow.

I split the class into eight groups and gave each a "Derivative Card."  On the top it had "Find f '(x) when f(x)=..."  I used four basic functions:  f(x)=x^2, x^3, 1/x, 1/x^2.  Each function had its own color.  When the students were done, I asked them to find the other group with the same color and see if they got the same answer.  I loved this because the students were doing all the work.  We then created a table on the board using what the groups just found.  I started with f(x)=x (which I didn't give to any group).  The table looked something like this: 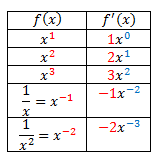 It's nothing new, but the students came up with it themselves, which is the great part.  They were able to generalize the rule no problem too.  Which makes my heart very happy.

Update 6/26/2014
Here are the cards from above in electronic format:
Power Rule Cards
Posted by Rebecka Peterson at 9:06 AM No comments:

Summer classes started this week, which means I've started my two calculus classes (wohoo!).  One is essentially a survey course and the other is Calc I.  I'm enjoying it a lot, but I've also been continually up to my eyeballs in lesson plans, homework, and tests.

And it's only the first week.

In any case, as I was preparing for these classes last month, I came across this wonderful introduction to rates of change using (wait for it) a burger-eating competition.

I got some good answers, like speed and rate.  I also got a suspicious answer:  average rate of change...way to steal my thunder.

We talked a bit about the importance of units when it comes to speed and then I asked them to consider speed in another setting--the speed of a person consuming an exorbitant amount of burgers:


And now for the questions...
So it's not revolutionary or anything, but it was a nice way to introduce calculus and ease everyone's nerves a little (including my own).
Posted by Rebecka Peterson at 3:54 PM No comments: