Two disciplines that I think are making me a better teacher

Last spring I started reading Ann Voskamp's One Thousand Gifts.  In her book, Voskamp talks about the tragedies she's faced in life...and how she's gotten through them.  For her, it all started with a dare:  Can you write down one thousand things you're thankful for?  She started this list, and the lessons she learned morphed into her book.  She keeps a journal of the things she is grateful for, and--she says--it's changed her life.

There's really just one criterion she gives herself:  be specific.

It's been about a year since I read her book, but the theme keeps nagging at me--what would it look like to live a life that's truly grateful?

I was curious.  But I also knew I needed ways to practice this thankfulness on a daily basis.  Voskamp had her journal.  I needed something concrete, too.  And, specially, how could I incorporate it into my teaching? Because that's basically my life right now.

This semester I'm trying out two ways to be thankful as a teacher.  Now, mind you, the semester has only just begun, so I hope this post isn't premature.  But, I've already started to see a change in my attitude... 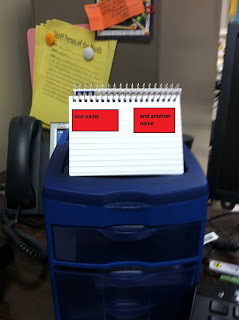 I have 150 students.  For the most part, I love that.  I love that I have a chance to impact so many lives.  However, it can also be incredibly draining.  Their struggles--which often reach far beyond the world of academia--become my struggles and wear on me.  There's no way to give each kid the time s/he needs every day:  there just aren't enough hours in the day.

So, I needed a way to narrow down my focus somehow.  I bought a spiral notebook with index cards and wrote two students' names on each card.  Every morning, I flip over a card and see two students whom I purpose to be thankful for that day.  Some mornings, I see the names and think, "Well that's easy!  These kids are awesome."  Some days it takes me a while to come up with specific things I'm thankful for in those students.  But I'm liking the challenge.  And I do think it's changing me for the better. This wonderful blog started by Rachel Kernodle has been another great way for me to stay thankful.  The tag line says it all:  "Every day may not be good, but there is one good thing in every day."  At this blog, teachers share one good thing that happened that day.  What an incredible idea!  I've greatly enjoyed both reading and writing.

Part of the reason I'm sharing these two disciplines is because now that I've put it out there, I have an even bigger motive to stay consistent.  I hope I can continue these practices through the end of the year, and then reflect and see if they've changed me.  Time will tell...
Posted by Rebecka Peterson at 5:24 PM 4 comments:

Email ThisBlogThis!Share to TwitterShare to FacebookShare to Pinterest
Labels: musings

Write the equation of a rational function with the following properties: 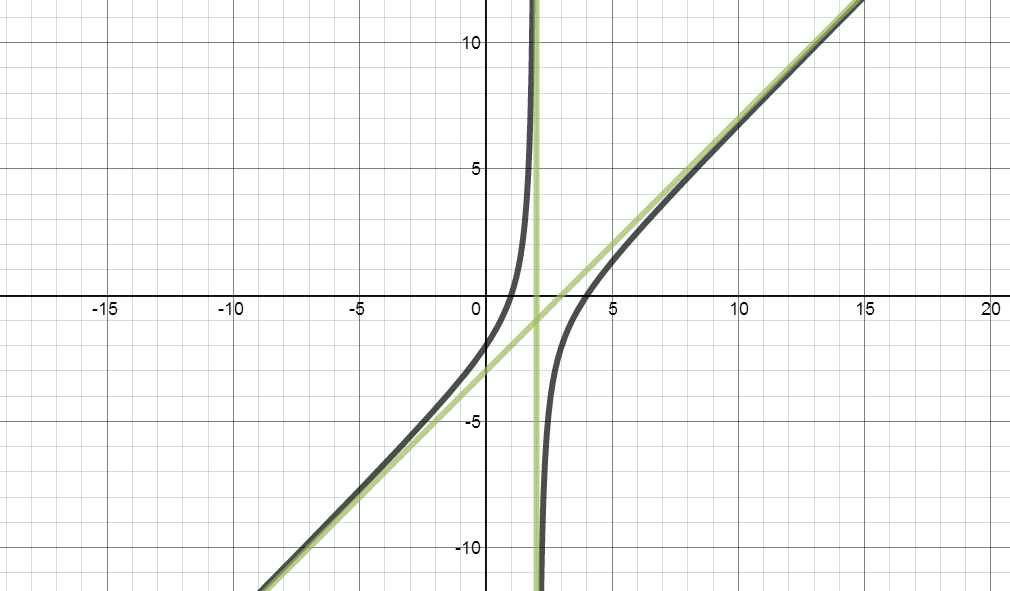 I just finished conic sections with my Algebra II kids.  I used the Conic Cards, created by the wonderful Cindy Johnson (@Johnsonmath), with whom I get to teach in the same building!  Both Kristen Fouss and Amy Gruen have used the Conic Cards and written about the awesomeness of them here and here.  They are truly amazing.  I was dreading teaching conic sections, but after two weeks of card matching (and the two weeks were right after Christmas break, I might add), the kids were able to knock the socks off their first test of the semester.  Which leaves us all happy.

In order to emphasize the similarities and differences of the equations for conic sections, I created this flow chart that the students filled out and used once they had learned all four conics.  Before the flow chart, every time a kid would say, "Mrs. Peterson, is this a hyperbola?!" I would go through the same questions with her:

"Are both variables squared?"

I got tired of going through these questions over and over and over.  Also, I don't think the kids realized the order in which I was asking the questions, which didn't do much for them except answer the immediate question.

So, now, instead of answering their question with a string of my own questions, all I have to say is, "Do you have your flow chart out?"  Much less work for me.  A little more work for them.  And they're reading.


The wording isn't perfect.  I don't know how to succinctly differentiate between the ellipse and the circle in standard form.  This is the best I came up with.  Of course, then kids think as soon as an equation has fractions in it, it can't be a circle.  That's not really what the wording says, but I totally understand the confusion.  I combated the confusion the lazy way:  all our circles' centers were (m,n) when m and n were both integers.

Another good thing:  this flow chart can be easily changed to classifying conic sections in general form.  I just had the students take a few extra notes on the side (such as changing different denominators to different coefficients), and they were good to go.

All in all, conic sections went very smoothly.  And now onto exponential and logarithmic functions!
Posted by Rebecka Peterson at 3:43 PM 6 comments:

Over break, I bought something that changed my life.

The 10-drawered, 5-colored cart you see up there?  How perfect is that for a teacher who teaches five classes a day?  Why did it take me this long discover this little jewel?

This is how I'm using it:  each of my five classes corresponds to a color, and each class has both an "In" drawer and an "Out" drawer.  Students deposit their work in their correct in-box, and if I have a handout or worksheet for absent students, I simply write their name on the paper and stick it in the out-box.  No more, "What did I miss yesterday?"!

I've only been using the cart for a week, but I'm already in love with it.  The kids seem to really like it, too, actually.  Several of my Pre-Calc kids kept marveling, "How did you find something so...perfect?" (I love my nerds.)  In addition to the ten drawers, there's also a flat surface on the top, which I've used a lot, too.

I'm certain I'm not the first to have discovered this gem-cart, but I still thought I'd pass along the wonderful news.  Here's a picture of my cart with its labels.  My cart was fairly cheap ($30 at Walmart), but I think it will hold up just fine. 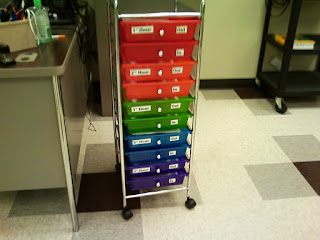 If you go get one, you can even use my labels that took me a whole sixty seconds to make:

Labels for Colored Cart by
Posted by Rebecka Peterson at 9:18 PM 1 comment: