What we did post-AP Exam

I still had a few weeks of class to fill after the AP Exam.  I definitely wanted the kids to still be working, but not necessarily on calculus and not to the point where they had tons of homework.  So, this is what we ended up doing:

Here's what we did for the shoe box project.  The kids were asked to create a rate FRQ and then make a shoe box scene that went with their story (like in elementary).  I think they had a lot of fun with it.  We basically just modified an Algebra 2 assignment, so if I owe you credit for this, please let me know!


Here are some of their finished products: 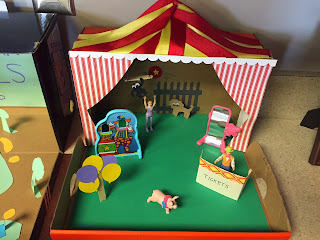 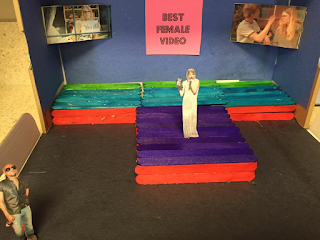 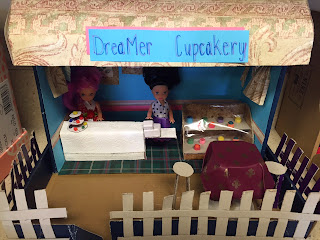 **********
For the End of Year folder, I asked students to correct all quizzes and tests from the semester (I asked this of them last semester, too, so they were expecting it).  Sure, this would have been good to do before the AP Exam, but it just fit better after.

I also had them fill out two surveys:  one that was just a general "What should I keep/change for next year?" (here) and then one that asked them fill in positive adjectives for each of their classmates (here), which I used to create Wordle bookmarks for end-of-the-year gifts (thank you, Pinterest). More on this at the end of this post.

Finally, the week before finals, I gave a totally non-math project, which I called Serve + Create (details here).  I told the kids that in the midst of both joy and sorrow, it's important to learn how to cope with change, and that two of the best ways I know to do that are (1) serve someone else and (2) make something.  So, that's what I asked the kids to do.  I gave them very little guidance.  I wanted it to be organic and come from them.

I wanted to take a day just to say goodbye to my lovely kids, many of whom I've seen every school day for the last two years.  So much is written on things to do the first day of school, but I feel like we are lacking in material on last day of school activities.  Especially if you have seniors, I think it's so important to make a big deal of the last day, because you accomplished a lot together.

So, for the last day, I first passed out my junior and senior letters, which were not too different from last year's letters (here).  One thing I did add was advice from the Class of 2015.  I gave the seniors a whole white board and about a week to add their advice/wisdom for us.  Afterwards, I took a picture and copied it to the back of each of the letters:

{This might be a good time to mention, again, if you've never used the app DocScan, I highly recommend it!  Covert pictures to PDFs easily.}

After passing out the letters, I read Oh, The Places You'll Go! by Dr. Seuss.

Next, I passed out these bookmarks that had a word cloud with each of their names and the adjectives their peers and I had entered for them in the survey:

I read each one out loud.  The kids seemed to love this.

Finally, I just spoke for about a minute (this is all my heart could handle) about what a great time I had being their teacher, and how excited I am for their futures and for the futures of the people whose lives they will certainly change for the better.  The last half hour kids spent saying goodbye to their friends and to me.  Lots of pictures were taken and some tears shed...it wasn't an easy day, but I very much wanted to make the last day of calculus something meaningful, for both the kids and for myself.

These are world changers.  Of this I am certain.
Posted by Rebecka Peterson at 9:50 AM 714 comments:

How I did homework this year in PreCalc...

I stole this idea entirely from the teacher who taught APSI last summer.  I was intrigued by it, so I implemented it in my PreCalc classes this past year.  My kiddos are begging me to extend the concept to AP Calculus next year because they loved it so much (you'll see why...).  I'm undecided.  I thought I'd write about it and get your take...

The premise of this homework set-up is that kids get rewarded for doing homework instead of being punished for not doing homework.  This is how I ended up doing it, which is a slight modification from the way the APSI instructor did it.

What I liked...maybe even loved:

So...what are your thoughts?  Is this worth extending to calculus?  Or at least trying it?

I'm fairly certain that I'm keeping this method in PreCalc next year, but what about for Calculus?  Help!
Posted by Rebecka Peterson at 4:04 PM 16 comments:

I've posted a lot about our AP Calculus AB final project (Serve + Create) on the One Good Thing Blog; it was a two-part project in which students were asked to (1) serve someone else and (2) create something they enjoyed making.  I haven't explicitly written what I gave the kids or where this idea came from; hence, some details about the project:

I gave the students four class days (there was also a three-day weekend in between) to work on whatever they wanted.  I told them that some of them would want to use this time for their final project, but most of them would probably want to work mostly out of class.  So, I didn't feel too bad giving a few "free days."  Several did work on their art project and several went to serve a teacher during these four days.  Others relaxed and played math games and worked entirely on the project on their own time.

This idea stemmed from an interview I listened to with Glennon Doyle Melton (here).  In the interview, she was asked how she deals with all the hardships she sees and reads about on a daily basis.  How do we get ourselves out of our own misery?  She said she always comes back to two things:  art and service.

I couldn't agree more with Melton's advice.  I had never realized that art and service were two ways I dealt with change and loss, too.  Thus, this interview was a catalyst to a project I've been mulling over for quite some time...

You’re almost done!  I recognize this can be a stressful and bittersweet time for both juniors and seniors alike.  While I hope you’ve learned lots of calculus throughout the year, there are things that are more important than mathematics:  one of those being—How do you cope with change?  There are two ingredients I want you to practice before you leave our class—service and art.  When life gets chaotic, one of the best things you can do is remember that there are others in this world who are suffering, and do something to help them.  Furthermore, creating something through an art medium is a great way to express yourself, especially in the moments when you’re feeling overwhelmed.  As a way to encourage you to practice both the art of service and creativity, I've made this our final project for the year (worth 25 points in the test category).

SERVE:  Think of something you can do that would positively impact someone else’s life in a significant way.  Spend no more than $20/person.  You may work in groups or as individuals.

CREATE:  Create a piece of art that you’re proud of.  This is not limited to drawing or painting:  think outside the box!  Express yourself in a way that is unique to you.  Please work individually on this.

On Thursday, May 28, you will be asked to share both your projects with the class.  I do not want to stifle you in any way, so grading will be based on completion:  do the project and you’ll get full credit.

I'm so proud of all your work this year.  It’s been an honor to be your teacher!

I've never done anything like this, but the results were absolutely wonderful.  As I posted on the One Good Thing blog, here are some of the things the kids shared on Thursday.  They...