The AP Exam is over! This year, I reviewed my kids very similarly as I did last year (each week we focused on a new multiple choice and free response topic, with a review quiz each Friday that the students helped write).
One free response topic that was certainly lacking in my review last year was Rate In/Rate Out questions. These have intimidated my students in the past, which is not great as they seem to be becoming a popular first question (including this year). Not a great way to start the free response section.
So, this year we spent a whole day on these types of questions. However, instead of just throwing several past AP questions at my kids, I gave them ten different questions they may be asked to answer for these free responses. Of course, the College Board can ask whatever they want, but these are questions that seem to arise frequently.
We answered these ten questions for two arbitrary functions, I(t) (the rate IN) and O(t), the rate OUT. This seemed to really help my students. I'm relieved that I finally found a way to make these questions easier to digest because these really can be fabulous questions that model real-world situations beautifully.
Below are the ten questions with answers: 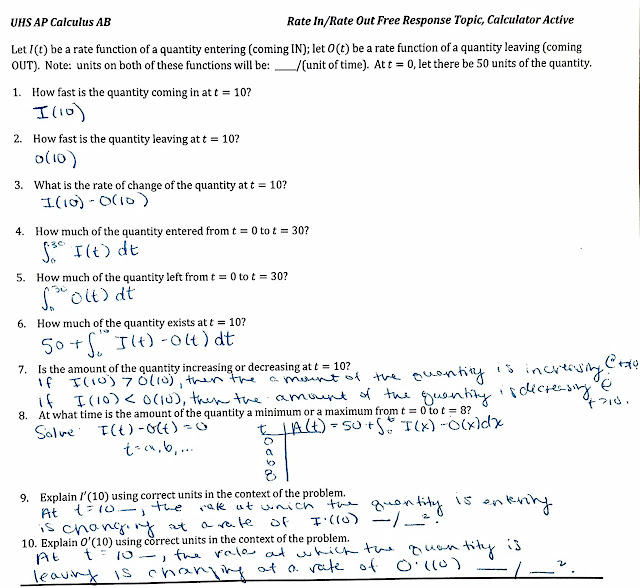 And here is the student handout (the ten questions, two past AP FRQs, and two FRQs I wrote).

A great follow-up to this is to have kids create their own Rate In/Rate Out problems. Unfortunately, I don't have time for this project until after the AP Exam, but it's still one of my favorites.
Posted by Rebecka Peterson at 9:09 PM 13 comments:

Last week, one of my seniors told me he's thinking about becoming a math teacher. I've taught this kid for two years--in PreCalculus and AP Calculus--and he's always told me he wanted to be a pediatrician. I'll tell you this: a bunch of my kids say they want to be doctors. You know what's different about this one? He would actually do the work necessary to become one.

But now this boy--this smart, competent, enthusiastic young man--is considering becoming a public educator instead. He has only one concern: Will he be able to support a family on an Oklahoma teacher's salary?

I ask you, how am I to answer that?

Some of your colleagues have answered my question with, "You knew what you were going to make when you entered this profession."

My students are starting to listen. And now a whole generation is terrified of pursuing an education degree out of fear that they will not be able to make it financially.

I'd like to paint you a picture. Let me tell you what my student's classroom would look like, if he decides to pursue a career in education.

His classroom door would be open to anyone, at all times. He would treat his students as if they were his own children. He would teach with passion and enthusiasm, researching ways to make sure every kid had the best possible learning environment. He would never give up on his students, even if they gave up on themselves. No child would ever feel left out or lonely, because this young man is a champion of the underdog. His students would learn elegant mathematics, and they all would be stretched in their thinking. They would leave his class with more confidence than when they entered.

His students would feel connected to their school, because this boy has more school spirit than anyone I've ever known. He would sit in the front row at their plays, games, and concerts. He'd be their biggest cheerleader. Those kids would feel so loved. His would be the class that would brighten their day--even when the demands of high school tugged at them.

You know that excitement and softness that people use when they talk to a new baby? That's the kind of enthusiasm and kindness with which he would treat his own students. Imagine a world where we all learned to treat each other in that way. We could start a revolution.

His students would learn the importance of serving each other and working together. He would model what it looks like to put others' needs above your own. He would serve and teach with generosity, humility, and compassion. He would be every kid's favorite teacher.

How would you answer him?

You and I both know we need people like him in the classroom. A high school teacher impacts thousands of young lives over his career. Think of the lives he could change for the better.

Now it's up to you.  What will you do to keep this young man--and many others like him--in our schools?

I hope you choose to go light the world.