Around the World with Absolute Values

A few weeks ago I fell in love with the way Kate Nowak teaches solving absolute value equations and inequalities, as inspired by an article by Ellis and Bryson.

You should really read Kate's post because it's right on.  I found myself laughing out loud as she explained the common mistakes students make regarding these equations and her snazzy way of trying out a different method (different to me, at least).

The idea is to emphasize that absolute value measures distance.  I love this for two main reasons.
So, today I got to teach absolute value equations and inequalities using this new strategy.  I was so excited.  And, much to my happiness, the lesson went very smoothly.  (Here are the lecture notes.)

To pound in the idea of what I've affectionately termed "Draw and Solve," we played a game the last twenty or so minutes of class.  It was a version of Around the World, which was seriously one of my favorite games as a schoolgirl (and I don't just mean inside the classroom).  Here's roughly how it went:  I would pull up a slide with a problem.  The first two students just had to draw the situation.  Whoever drew it correctly first became the defender and stayed at the board and the next student in line would become the challenger.  Now these two students had to solve the actual equation or inequality using the drawing the student before them had drawn.  The winner of this round would stay, a new student would come up and challenge, and we'd start again with a fresh slide.  So, the first slide looked something like this... 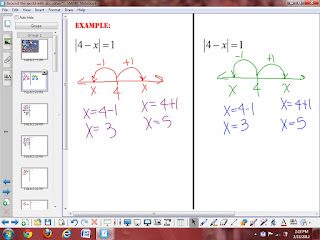 Thankfully, very few of my students are the "too cool for school" type, so they totally played along and seemed to enjoy themselves.  I'm sure giving extra test credit to the winners was helpful also.

The real metric (see what I did there?) will be how they do on their upcoming test.  I'm excited to see how it goes.
Posted by Rebecka Peterson at 10:17 AM