I blame @bowmanimal for all of this.  A few months ago he blogged about conceptualizing volume in calculus before formalizing.  At the time, I had just started looking over past AP Calc exams, wondering how I was going introduce volume (solids with known cross sections and solids of revolution).  Volume is a calculus topic I've not taught before, and I want my students to do more than memorize the formulas.  Because, as our own textbook puts it so beautifully: "Some students try to learn calculus as if it were simply a collection of new formulas.  This is unfortunate.  If you reduce calculus to the memorization of differentiation and integration formulas, you will miss a great deal of understanding, self-confidence, and satisfaction."[1]

Anyway, I tucked Bowman's post in my "Summer Projects" folder, and, well, it's summer now, so I thought I'd best get on with it.

Here's what came out of solids with known cross sections: 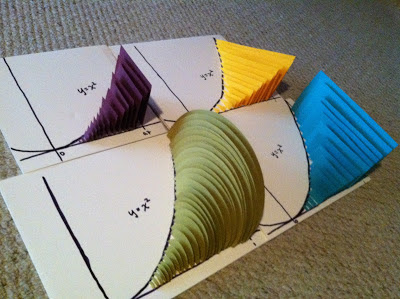 The idea is a type of think-pair-share activity where students conceptualize what's going on before throwing the actual mathematical definition at them.[2]  I love this because these visuals get glued to your brain.  Now when kids see:


Find the volume of the solid whose base is the region bounded by y=x^2, y=0, and x=1 and whose cross sections are semicircles perpendicular to the x-axis.

They're less likely to throw in the towel because of all the scary words and more likely to remember that green tornado-looking thing.  I hope the conversation that goes on in their darling little heads is, "Need to add an infinite number of infinitesimally thin semicircles...no prob...I've got the tool for infinite sums, an integral, baby!  Thanks, Uncle Leibniz!"

Bowman shares some great tips for constructing these solids (be sure to read his responses in the comments section, too), but I thought I'd add some hints that helped me, if you want to make these as well:

After students converse about what they've seen on the poster boards, I plan to explore this applet with them as well, so they can see a 2D visualization of the 3D object we've created.

Since I was already on this volume kick, I started to wonder how I could create a visual that would help students understand the formulas for solids of revolution (taking a graph and rotating it about a given line).  The answer?  Foam sheets and a wooden skewer: 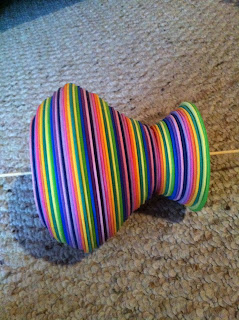 The graph I chose was y=sin(x)+2.5 (from 0 to 2pi) because I wanted the finished product to look kind of a like a vase and I also wanted to maximize the amount of area available to me on my foam sheets (bought in a pack of 65...of which I used all but 2).  And also because I wanted to show something other than a polynomial function.

Again, I was pretty Type-A about this little project.  The foam sheets were 2 mm thick, so I let 2 mm=1 unit and used a compass and my handy dandy graphing calculator to create circles of approximately the correct radii (overboard?  Yeah...probably so...).

The skewer was the best idea of this project because not only does it serve as a visual for the axis of rotation, but it was super easy to center all the little foam circles on it because of the imprint the compass had already made:


Again, instead of being scared of the weird words and sometimes weird, unhelpful figures that go along with rotation problems, I hope my students will think, "Just adding up a bunch of super thin (dx!) circles...gonna need pi*r^2 and an integral for that.  Thanks again, Uncle."[3]

And here is a fantastic Geogebra interactive worksheet we can explore as well.

I hope my students gain a great deal from these two summer projects.  I know I was really thrilled by the mathematics that was being exposed while constructing them.  For example, with known cross sections, decreasing the base by the same amount each time did not create even gaps between cross sections since the rate of change is smaller as we get closer to (differentiable) mins and maxs.  I had a similar struggle with the vase:  the closer I got to a min or max, the harder it was to get the right radius because the radii were changing so slowly. 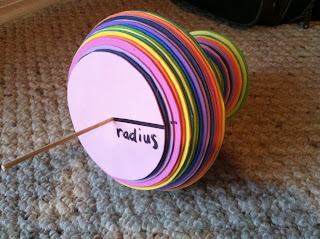 Update
The next year I had my kids make their own solids.  See post here.