Our latest adventure in PreCalculus was a scavenger hunt throughout the third floor of our school.  We're currently in our last unit:  matrices.  The final objective of this unit is to apply matrices in "real-world applications."  One of the most fun applications you can find, in my opinion, is encoding and decoding messages with invertible matrices.  I totally play up this application, telling the kids that I used to want to work for the NSA as a mathematician who encoded and decoded top-secret information for the government (which is true...but I always wanted to teach more).  At this point, they're pretty engaged because I'm a quiet, 5'1", 100-lb teacher who often gets mistaken for a student; so I think they find the thought of me working as a secret agent humorous (and rightfully so).

Once we went over how to encode and decode messages using matrices, I assigned some homework problems from the book to practice.  The next day, I took questions over those problems to make sure the kids were pretty sound on the theory.  And then came the fun part.  I broke each class up into five teams.  Each team was given five matrices (which were printed on different colors of paper) and one string of numbers (which was printed on one of the same colors as their matrices): 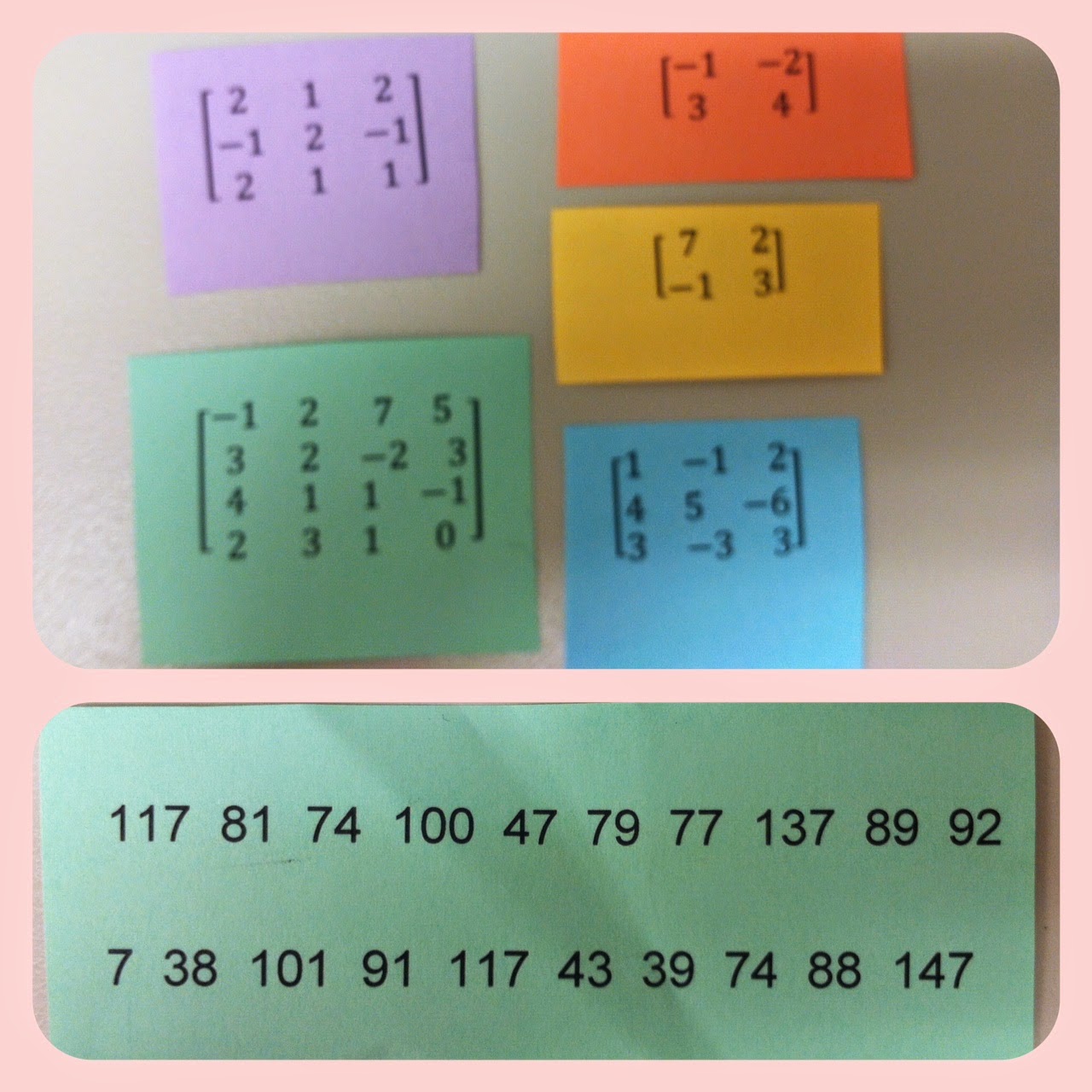 Whatever matrix was printed on the matching color was the matrix used originally to ENCODE the message.  Their mission--should they choose to accept it--was to DECODE the mess of numbers and translate it back to the original message, which would take them to a location on our floor where a new string of numbers was hidden.  I sent them to different teachers who would verify that the kids had gotten the correct translation (for example, the clue that sent them to the Advanced Physiology teacher who's known for cat dissection was "CAT MAN").  I also sent them to other well-known locations in my classroom or on the third floor.  At each stop was a new clue that they needed to decode.  All the teams eventually went to all the same locations, but I started them off at different locales, so they weren't really running into each other.


The kids absolutely loved this activity.  It took a little while (probably two hours) to create, but it was well worth it.  Once they were off on their hunt, I didn't have to do a thing.  Every single class asked if we could do it again (one girl even said, "I want to go back in time and start all over!  That was awesome!"), and several suggested expanding it to the entire building.  But I don't think I'm that brave (there are 3300 students in our building).

The adults who helped (teachers and counselors) said the kids were super respectful (I gave the students a  lecture about even though I wanted them to have lots of fun, to remember that others were in the middle of work and to mind their please's and thank-you's).  One of the adults said, "They were so polite!  Several teams would even give me the code, followed by 'Please?'"  Adorable.

We had tons of fun.  If you're interested in making something similar, I'd be happy to help you create clues for your specific location.  If you work at a school that is pushing STEM education, like mine is (HOORAY!), this might be a good little activity to add to your arsenal.
Posted by Rebecka Peterson at 1:11 PM