I haven't posted at all since school began over a month ago.  It frustrates me that the periods I do some really great work in the classroom (or at least, I think so) are also typically the periods I have zero free time and hence the best blog posts potentially go unwritten.

Well, regardless, here's something we did in calc a couple weeks ago...

A big idea I want kids to come out of calc with is that if we zoom in on a differentiable function long enough then the function, no matter how "squiggly," will start to look like a line.  Why do we care?  Because lines are crazy easy to manipulate and make predictions from.  The key is, if we get too far away from our "zoom point," the line we came up with will no longer be useful to us.

To help kids grapple with this idea, I split them up into groups and gave them a function and an x-value.  They were to graph the function on their calculators and then zoom in on the given x-value until they felt the function looked like a line.  At that point, I asked them to find a few things:

They were asked to do this for four different x-values.  Here are the slips of paper I cut up and gave each group: 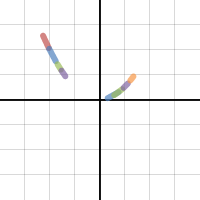 As they turned in their finished slips, I started to type in their lines (with restricted domains) into Desmos.  I couldn't type as fast as they were finishing, but this is one of the pictures we started to produce.

Hey guys...what function do you think these two groups had?  y=x^2?  You bet!  Could I have used that first red line for the whole function?  No?  Why not?

I think it really made sense to the kids.  In the future (NOW THAT DESMOS HAS A FREE APP!!!!!!!!!!!!), I think I will share a link with each group that has the same function and then THEY can type in their lines.  I'll have to show them how to restrict domains so I'll probably only have each group come up with two linearizations as opposed to four.

Here's the homework I made that went along with it.  Not sure the homework is much to write home about, but at the very least it gets the kids working with tables, which is a representation they need to be more comfortable with: