Before we ended our discussion on quadratic functions, I wanted to introduce my students to quadratic regressions.  What better way to do this than modeling the trajectory of an angry bird? 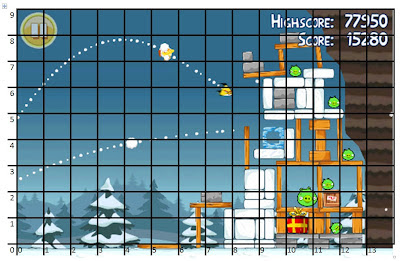 This is the picture I projected on the screen.  There is more angry bird/quadratic function material out there on the world wide web that is better than this.  However, I couldn't find exactly what I needed with the materials I had (I wanted a screen shot of an angry bird, whose path wasn't yet finished, with a grid on top).  So, I made this one on Word using a picture I found on the internet.  Be nice.  It took much longer than one would think.

We chose some points that the top parabola passes through and then fit a quadratic regression using those points.  I then asked if the students thought the bird would hit the ice block (around (9.5, 4)).  The results for this varied depending on the class and what points they chose to input into their lists (which is fascinating).

Below gives a picture of the points we plotted in one of the classes, the quadratic regression, and the point (9.5,4), which was plotted post finding the regression. 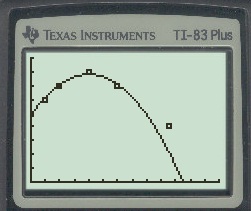 There's more to be done here, I'm sure, but it's a fine start.
Posted by Rebecka Peterson at 11:56 AM