Function Transformations/Domain and Range: Day 2 (and a bit more)

I started the year with domain and range of a finite set of points, because, it's an easy concept and I wanted my students to know--Algebra II is totally conquerable.

Fast forward a month, and I think they might just ready to handle a continuous case.  We broke it up sloooooowly and built towards finding the domain and range of the four functions they found the day before.

Obstacle #1:  Closed circle v. Open Circle
I really enjoyed this part of the lesson because the students were totally in to the closed circle v. open circle, which is awesome...but not before we jumped over a few hurdles.  When I asked them what an open circle denotes in mathematics, a few people proudly reported, "Parenthesis!"

No, sweethearts, an open circle does not mean parenthesis, last time I checked the dictionary.

So, we got to talk about my favorite branch of all--analysis.[1]  How could we write all the numbers between -5 and 4, but not including -5 (see fourth slide above)?  Of course, [-4.9, 4] was suggested.  But then poor -4.99 (just to mention one) gets left out!  Any number they suggested that was close to -5, but bigger, I could always find a number that was even closer (thanks, density!).

And then a kid suggested something that was absolutely brilliant.

Cue look of How far do I dare take this subject with these kids?

I wasn't quite sure.  And still am not so sure.  I decided to write this on the board:

So, new notation is all that we could come up with in order to fix this dilemma.  Parenthesis.  As was wildly suggested before.

Now if only they could remember a few of the deeper ideas as opposed to just "open circle=parenthesis."

Obstacle #2:  Domain of Deceiving Functions
Here's what I mean by a deceiving function.  I took y=x^3 and showed a graph like this:

Most students were convinced that the graph would never pass x=-3 on the left, and x=3 on the right; hence the domain must be something like [-3,3].  And who can blame them?  They haven't developed a good sense for what the graph of a function is yet.

But that's ok.  Because we have Desmos.

So, to abettercalculator.com we went to graph the function, along with the line x=-3: 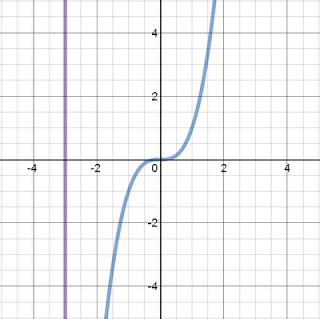 The kids' case was looking good.  Until we started scrolling down: 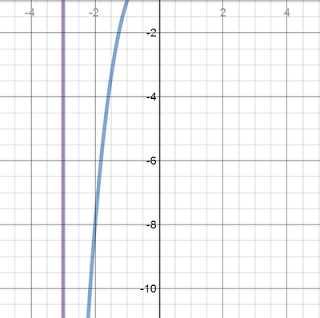 
And changing the y-axis view even more...

And this convinced many (though not all)...the domain is indeed all real numbers.

Days 3-5 were spent focusing on vertical and horizontal translations.  We tried vertical stretching/shrinking, too, but I started to lose several of them, so I decided parent functions, domain/range, and translations were plenty for now.  We can come back for the rest later.  That's the beauty of 180 days, as opposed to the 48 that I'm used to.

Before the unit test, we played Kate Nowak's Speed Dating Game, but I adjusted it for these topics.  You can find the game cards I created here.

[1]  I claim analysis/advanced calculus as my emphasis in grad school...mostly because that's what I took the most classes in and that's what I took my written comprehensive exams in.  In any case, while I can't say I've read that many texts on analysis, I can say, that Understanding Analysis by Stephen Abbott is, by far, the best text I've ever seen on introductory analysis.  All calculus teachers should be required to read it.  Truly!  It's the best.  Get the whole thing for free here.  Go.  Read.  ENJOY.  He's a master teacher.
Posted by Rebecka Peterson at 9:57 PM