To prepare for an upcoming test last week, my Pre-Calc/Trig students and I had a great time playing TRIG BRAIN POWER! (because I can't think of a better name, and yes, it must be in all caps).

It's quite simple.  On the SMART Board, my "home page" was a unit circle with six adorable colored brains sitting on the positive x-axis: 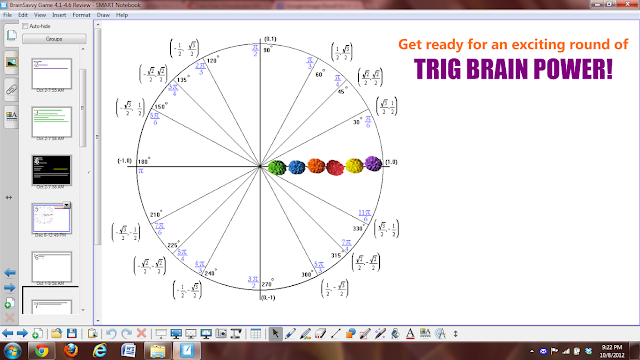 I split students up into six teams, one team for each colored brain.  I would show a review exercise, and when every single person on the team had a written response, the team raised their hands, which signaled me to come check their answer.  The first team with the correct answer got to move three spaces on the unit circle, the second team got to move two, and the third team got to move one.  After each exercise, I had the winning team explain their strategy, and if there were no questions we moved on to the next exercise.  The team that rotated through the greatest angle at the end of the hour won (we had to add 2pi rads a couple times!).

I essentially adapted a game called BrainSavvy that I found on SMART Exchange.  If you want the Notebook file for this particular edition of TRIG BRAIN POWER!, just shoot me an email.

I liked this because it involved minimal prep, the students had to work with each other, they worked hard, and they had fun.
Posted by Rebecka Peterson at 9:50 PM