A couple years ago, Kate wrote about a good activity for discovering the Intermediate Value Theorem.  In a nutshell, students are given the theorem and asked to state the hypothesis and conclusion.  Then they are instructed to create four graphs:


I did this activity with my calc students the second week of school.  I really do love it...but, looking back, I think I was asking too much of them too quickly.  I tried the same approach at least two other times to introduce different theorems (differentiability implies continuity and Rolle's Theorem) and the kids did get slightly better at these tasks, but I could still sense more frustration than I wanted.  Some frustration is good, but not so much that they feel defeated before we've ever done any true problems.

So, in order to talk about another important theorem, the Extreme Value Theorem, I used the same idea but with some more scaffolding.  As their warm-up, students were instructed to read from their texts what EVT says and then write the hypothesis (f is continuous on a closed interval) and conclusion (f attains both a min and a max on that interval).

I wrote both of these on the top of the board, too, for reference, and then underneath showed them these graphs: 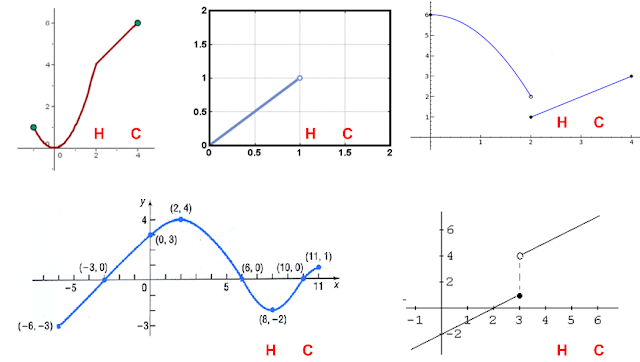 I asked them to find someone around them and, together, decide for each graph whether (1) the hypothesis was satisfied and (2) the conclusion was met.  You know those moments in class where even you, as the teacher, are taken aback by the enthusiasm of your students?  This was one of those moments.  The kids were at once having rich mathematical discussions and teaching each other.  Maybe it was because, for once, I wasn't asking them to come up with these examples on their own.  But I'm going to chose to believe it was because the task was just the perfect mixture of difficulty and attainability.

After a few minutes of letting my students discuss, we went over the correct answers, putting an X over H or C if it was not met and circling the letter if it was met.  I asked them which case we never had (circle on H, X over C) and we discussed why such a case is impossible to draw.

What I love about this is that students are forced to use appropriate vocabulary.  I always want to send the message that I respect their intelligence and never want to dumb-down material.  I think that was met here.

Were my kids using the highest level of critical thinking--creating--in this task?  No, they weren't.  But, they were understanding, applying, analyzing, and evaluating.  Every single kid was.  And that's a trade-off I'm absolutely willing to make.  Next year, I will probably introduce most theorems in this manner.  Maybe I can build up to students creating their own examples.  But, I think that's an unrealistic expectation of my students during their first semester ever of calculus.

Posted by Rebecka Peterson at 9:52 AM