Actually, in all honesty, we have about a 97% college-wide pass rate, but it's still nerve-wracking giving a final that you, as an instructor, have never seen.  So, today we started reviewing.  With dominos. 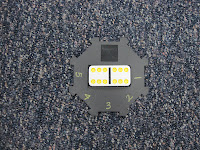 We started with the 6/6 domino in the middle of the floor with the rest of the dominos spread out around it.  From there, each team was given a set of four problems.

I'm not gonna lie, this game took a bit of prep work.  I started out by creating the following domino creation (the pack I bought came with that nifty plastic octagon--perfect!).  I did this to ensure that no domino would need to be used more than once. 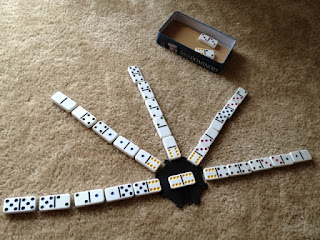 Each "ray" represents a team's problems.  So, from here I had to create problems that had the correct solutions.  For example, looking at the leftmost ray, I had to create four problems that had solutions of 5,1,2, and 5, in that order. (I decided to just do four problems instead of five.  So ignore the last domino in each ray.)  Obviously, having only seven numbers to work with isn't so fun.  To combat this, if a solution was 12.34 and I wanted the team to pick a domino with a 2, I wrote:  "1DOMINO.34."  Not super elegant, but it made sense to my students, which is what matters.  It also allowed me to use the same problem for more than one team.

When a team was finished, I had them add their dominos together to see if their sum matched the sum I had in my notes (kuddos to my husband for this suggestion!).

What I liked:
What I didn't like:
Posted by Rebecka Peterson at 2:44 PM