Someday I'll figure out how to teach circles

Oh, circles.  How can I do you justice?

Circles present a dilemma for me.  I think it's because the way I typically introduce the standard equation of a circle is so abstract for something that is rather straight-forward.

The way I see most textbooks present circles, and the way I've presented circles in the past is very similar to this:

Every semester I think, "Maybe I can make this derivation make sense to them this time around!"

And every semester I fail.  Miserably.  I mean, you can practically taste the glazed-over looks.  It doesn't matter how many times I say, "It's just the Pythagorean Theorem, guys!"  I've lost them.

So, I tried something different this time around.  It's still far from perfect, but the equation of a circle came much faster and from many more mouths than usual.  I did what most of us probably do when trying to verify a general concept:  apply it to a specific example.

I showed them this picture and asked them to relate the lengths of a, b, and r using the Pythagorean Theorem, and then find the exact lengths of a and b.  And, most importantly, how did they arrive at the lengths for a and b (without just counting units). 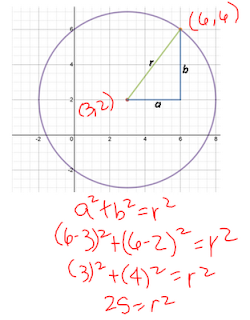 Then I showed them the same picture as before and asked for the same information, but this time--no grid, no numbers.  I told them to call the center (h,k) and the other point, which represents any point on the circle, (x,y). 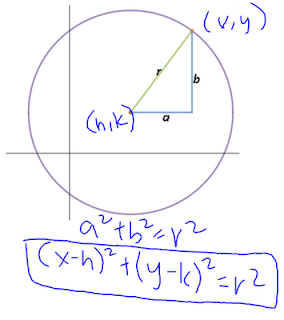 They came to the result pretty quickly.

Some concerns I have with this strategy:  Do they understand the significance of x and y?  Did they just regurgitate the example from before without thinking about the fact that they're deriving a general equation? I desperately want to teach my students how to think abstractly and generally because, well, that's what pure mathematics is about.  But is it more important for some ideas than others?

Like I said, I'm happier with how things went this time around.  But not yet satisfied (hopefully I never fully will be).  Any suggestions are gladly welcomed!

Posted by Rebecka Peterson at 12:07 PM